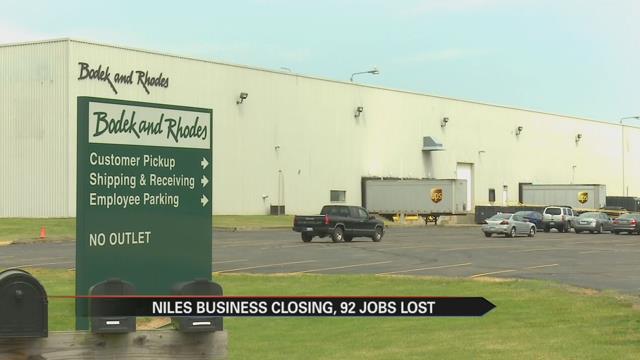 A large employer in Niles is shutting its doors in the coming months, leaving nearly 100 Michiana residents without jobs.

“I have three years til I can retire, and now I can’t retire from here, so I have to start all over somewhere else,” Brenda Kitchell said.

Kitchell will soon be laid off, after 16 years on the job, at the Bodek and Rhodes apparel distribution center in Niles.

“It was perfect,” Laura Casey said, speaking of her job. “I don’t want to start from the bottom again, but I don’t have a choice.”

Casey will soon be without her job, too, after 11 years at Bodek and Rhodes.

A group of seven employees spoke to ABC57 on their lunch break Tuesday, representing a small handful of the 92 employees at the distribution center who will all be jobless come September.

“We were all surprised at the time [we found out], and kind of all in shock,” Denise Weir, who has worked at Bodek and Rhodes for 12 years, said. “

They were in shock last December, when it was announced the apparel distributor’s Michiana location would shut down after the company either merged or was bought out.

In a formal letter to the state filed three weeks ago, the new owners write, “On September 30, 2016, the company will permanently close the entire [Niles] facility…all employees at the facility will be terminated permanently.”

“It was supposed to be a merge, and then all of a sudden, they’re selling it out and they’re moving everything to Illinois and not offering anybody a job,” Casey said. “So, it’s kind of blindsiding.”

The 92 employees are guaranteed jobs through August, but after that, there are no guarantees.

Of the seven who spoke with ABC57, six of them said they have families, but none of them have a job lined up for September.

Though a hiring sign still stands at the company entrance in Niles, the employees inside know the end is near.

“We’re gonna have to start back at the bottom and bring ourselves back up,” Rose Ottinger, who has worked at the center for six years, said.

Management would not speak on camera Tuesday, but they offered the phone number of the CFO of the company that now owns Bodek and Rhodes in Niles.

A call was placed to the CFO and a message was left – asking why the Niles location is closing – but the call has not been returned, as of Tuesday evening.