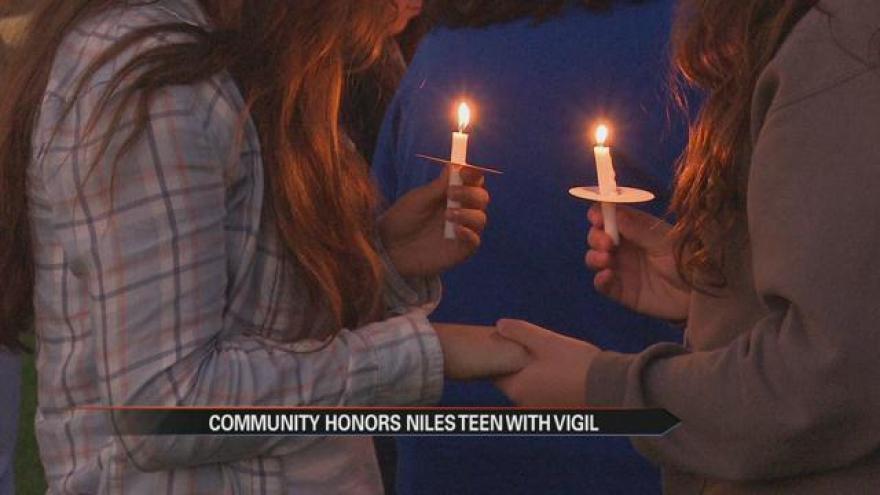 A Niles teen is on life support after attempting to commit suicide to escape bullying.

The community hosted a vigil Friday at the Niles Apple Festival grounds in his honor.

His friends and family say they hope to at least save someone else.

“Just be there, that’s what makes a difference,” said local pastor Jared Eckerley.

That’s perhaps what could have made a difference to sixteen-year-old Adam Stoops.

“I didn’t know about it. He didn’t even say anything,” said Meagan Franch, Adam’s former girlfriend.

He was repeatedly bullied for more than a year at Niles High School.

“I just completely lost it. His friends told me, and I was just like, what do you mean, what’s going on? And I had to go to the counselor’s office, because I couldn’t. It’s really hard,” said Meagan.

Meagan made a necklace with an ‘A’ for Adam to help herself get through the pain.

Now, Adam is on life support.

“I feel like I could have done more to fix this, so we wouldn’t be here like this,” said Adam’s cousin, Bailey Ferguson.

But as Adam’s family prays for a miracle, the community is coming together to stop the cycle.

“Something needs to be done, and it hit home for me, because he’s sixteen, and I have sixteen-year-old triplets, and I know what they struggle with, and I know kind of what goes on with our youth group and through our church, and it’s a big issue,” said Pastor Eckerley.

“And it needs to be addressed, because how many kids have to go through this before they realize—it’s just hard,” said Meagan.

Hundreds came out to say, “Not one more.”

“I don’t understand why people put people down like this. People just need to stop with everything,” said Bailey.

“Let’s end this now. Let’s not just sit around and let this happen,” said Pastor Eckerley.

So the Niles community is standing up for Adam, and for anyone who feels alone.

if you want to help the stoops with their hospital bills, click this link to a gofundme page that Adam’s uncle set up.