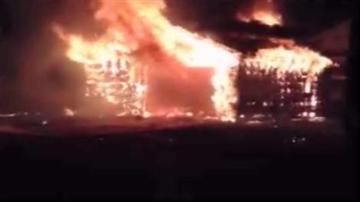 NILES, MICHIGAN – A woman in Niles is thankful her 15-year-old son is safe after a fire burnt her garage to the ground and took down a couple of power lines with it.

“The neighbor called me and said that she had my son and that he was okay and that my house was on fire,” said Jennifer Archer.

Archer says she could not be more thankful.

“We accessed the structure from the alleyway and extinguished it pretty quick,” Niles City Fire Chief Larry Lamb.

Luckily Niles City and Township fire crews put the fire out before it damaged Archer’s home, but the fire caused another problem.

“He was playing his Xbox and he said the lights flickered.  He looked out his bedroom window and he saw the garage on fire and I guess the power went out,” said Archer.

“We had some issues with power lines. They had been damaged and dropped down onto a medal fence,” said Captain Lamb.

The city utility company was called out to restore power for two residents.

“My son is okay so that is all that really matters,” said Archer.

Investigators are on scene trying to figure out what caused the fire. Power has been restored.