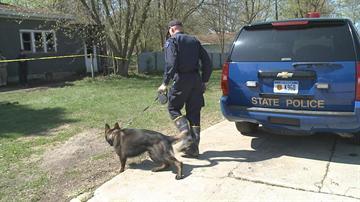 NILES, Mich. - The City of Four Flags was the city of four fires Monday morning and police think someone is behind all of them.

Three fires were set within an hour this morning. A total of four houses burned and they all happened within seven blocks of each other.

According to the Niles Police Department, the first house was set on the 1600 block of Cass Street just before 3:30 a.m. Not long after two houses next door to each other burned on the 1300 block of Louis and a third was lit two blocks from there on 13th street just before 4:30 a.m.

Three of the four houses were empty. A home on the 1300 block of Louis had four people inside. All got out uninjured.

Michigan State Police ran accelerant sniffing dogs through each of the buildings Monday.

“Could have been anybody’s house,” said Robert Phillips, a Ferry Street resident. Phillips took out his own dogs out to check the damage all over his neighborhood. “I’ve never heard of anything around here happening like that.”

“It’s getting kind of scary,” said Jason Fletcher who lives a block from one fire and across the street from another.

“I (saw) the orange glowing that way,” said Fletcher. “Then I came back, I got to the gate… and I saw the whole back of this one just going.”

According to police there’s evidence that the two empty houses were broken into and set on fire. “The cause and origin at the first house and (the third) house are showing that there is no accidental cause for the fire,” said Rick Krueger, with Niles Police. “So that leaves human intervention.”

Police determined that all three fires are related although a cause and origin has not been determined for the double fire on Louis Street.

Neighbors and police want to know who’s up to it.

Niles Police said extra patrols will be out and are telling people to lock their doors.