NILES, Mich.—Niles High School held an interactive assembly on Monday ahead of prom to show students the consequences of destructive driving, reflecting a push by both schools and MDOT to crackdown on the issue across the state.

Karissa Young, veteran teacher at Niles High School and Students Against Destructive Decisions (SADD) advisor, used the event to launch pathways of communication between parents, students and teachers about dangers of being on the road.

“With all of the decisions that teenagers make that even young adults make with destructive choices, SADD just wanted to bring someone in to talk about destructive driving and the risks that could potentially happen, especially around prom and graduation season,” Young said.

Students teamed up with each other to respond to trivia questions that covered not only questions about driving, but included pop culture questions as well.

A dance competition completed the event, with students taking the stage to dance their way to coveted gift card prizes.

Watch the video below on our ABC57 Instagram page for a peak inside of the event. (Story continues below video)

A skit invited two students to the stage to use their abilities to convince the event’s host not to “drive” impaired.

“I’m going to go to Waffle House,” the host said, acting as though he was impaired.

The event is just one that SADD puts on throughout the year, hoping to encourage students to make smart choices when getting behind the wheel.

“I hope that even if we touch one life today that we can do that and all of our students can be safe,” Young said.

A problem beyond prom weekend

“Facts that are out there often times, the statistics, can be kind of alarming,” Young said.

Data backs up Young on this one.

According to the CDC, one in 10 teens in high school drinks and drives.

A SADD poll found that more than a third of teens mistakenly believe they drive better under the influence of marijuana.

Organizations like SADD work to create programming that promotes safe driving and choices on a national scale.

A group working towards similar goals, Mothers Against Drunk Driving (MADD), uses their own five star rating system for all states and Michigan scores just one star in total. According to MADD, Michigan is one of the lowest rated states across the entire nation. 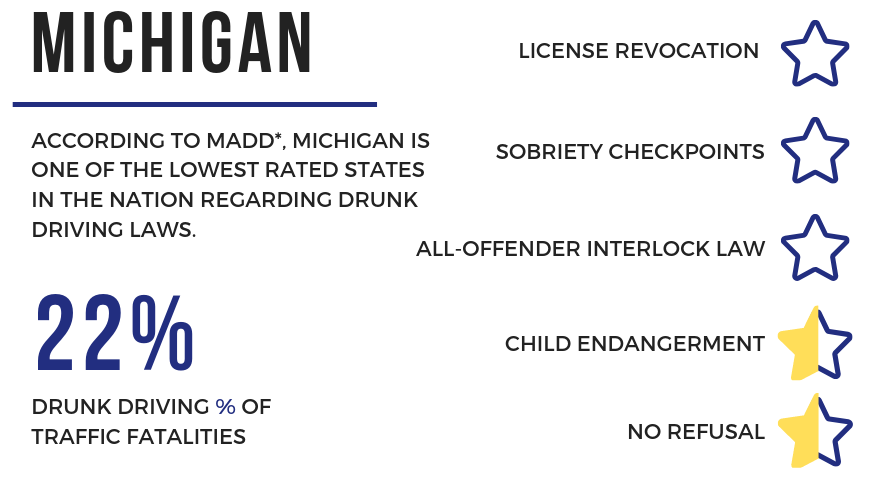 MADD's rating systems shows improvements that can be made by the state to increase its score, like passing stricter laws regarding ignition interlock requirements for all offenders, legalizing sobriety checkpoints monthly and increasing consequences of driving while impaired.

Young also has a simple idea for beginning to help the teens in your life make positive choices.

“For parents, talk to your kids. Just be open with the, let them be open with you. Teachers, talk to them in the classroom, talk to them outside of school. Students, just make good choices, positive choices that not only affect right now but also the future,” Young said.