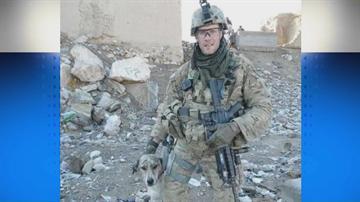 NILES, Mich. -- An entire community is praying for 10 local soldiers that were injured when two trucks were hit by roadside bombs in Afghanistan.

The Michigan National Guard says the attack happened Sunday to the 1-126th Calvary Charlie troop based out of Dowagiac, Mich.

Capt. Aaron Jenkins of the Michigan National Guard public affairs said the soldiers on patrol came across two IEDs (improvised explosive device) during a mission. The first truck was hit by an IED and flipped over as a result.

Three soldiers were critically injured and taken to a military hospital in Germany to be treated including, Specialist Eric Lund of Ludington, who lost both of his arms in the attack.

Lund, 29, was in the first truck and suffered the most severe injures after getting pinned underneath the gun turret.

The second vehicle was also struck by an IED while providing cover fire as a rescue team came to the aid of the soldiers wounded in the first vehicle.

ABC 57 talked to the wife of one of the injured soldiers who was in the Humvee that flipped after the first roadside bomb went off.

According Jennifer Jackson, Sgt. David Jackson, 27, of Niles was in the same vehicle as Lund and only suffered a concussion as well as a shoulder injury. Jackson tore the muscles around his left shoulder and collarbone, said his wife.

Jackson is in stable condition and expected to return to active duty after completing physical therapy.

His wife says this is Jackson's third tour, but his first ever in Afghanistan. The 27-year-old father of two  joined the armed forces just after high school.

He and his wife have two young girls together. Gracie age three and the couple's newest edition, 7-month-old Payton.

Friends and family say Jackson is not only a great soldier and dad, but has always loved helping people.

Now his family, especially his wife, say they are counting their blessings, knowing he is doing OK.

The attack comes just after the NATO Summit in which many world leaders, including President Obama talked about plans to start withdrawing more troops from the region as early as this year.

The unit isn't expected to return home until sometime this Fall.