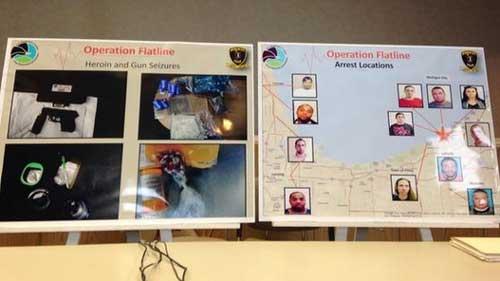 The United States Attorney's Office held a press conference Monday to announce nine people have been arrested in connection with a heroin distribution conspiracy that operated between 2009 and 2014 from Illinois to Michigan City.

The defendants were identified as

According to the US Attorney's Office, vehicles, weapons, cash and drug paraphernalia were seized late last week.

US Attorney David Capp says he will seek for all of the defendants to be held without bond.

"Heroin has become a scourge on many of our communities, many young people are destroying their lives," said Capp.

According to the indictment the nine arrested are charged with knowingly and intentionally distributing and possessing with intent to distribute heroin for their own profit.

The indictment names Willis as the principal supplier along with Dinkins and West.

According to authorities, the heroin was purchased in Illinois, brought to Northwest Indiana, then packaged into small capsules to be sold.

"This was regular non-stop activity back and forth that's bringing on a regular basis a lot of those capsules into Northwest Indiana," said Capp.

According to Indiana State Police data, St Joseph County is the leader in heroin use in the state of Indiana

Agencies are hoping people who are addicted to drugs will get help.

"Find some solutions for those that are out there suffering from this heroin addiction that plagues not only LaPorte County but all of Northwest Indiana," said Mark Swistek, Michigan City Police Chief.

The defendants have hearings set for this week and will be appearing before a US Magistrate in South Bend.