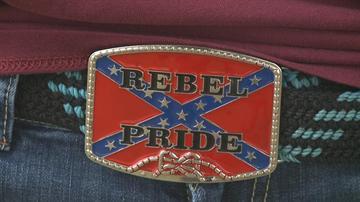 DOWAGIAC, Mich. – On Tuesday, students walked out of Dowagiac Union High School with their t-shirts proudly tucked in to show-off their shiny, red and blue belt buckles.

Two girls exited together, both had their jeans held up with the same Confederate flag buckles with big, black, bold letters that spell out “Rebel Pride.”

Sophomore Rikki Baker said, “To me, it just represents the people from the South.”

Baker got sent home from school for that very same belt buckle just a few days ago. She was the first student to get called into the vice-principal’s office on Friday. “She asked me to cover my belt buckle or remove it because people were getting offended by it,” Baker said.

The vice-principal told Baker other students had complained about the Confederate flag clothing and the administration deemed the attire to be a distraction, stating it disrupted class which in turn, is a violation of the school’s dress code.

Baker refused to take off or cover up her belt buckle and was sent home for the day, suspended and she wasn't the only one. Quite a few students decided to protest the new policy, nine students were suspended for wearing the Confederate flag.

“So in other words you’re telling me that because someone else is offended of what he’s wearing, he has to give up his right and freedom to express himself because they have theirs,” Chris Matthews said. Her son, Junior at Union High School got in trouble on Monday when he wore a Confederate flag t-shirt to school.

Matthews got a call from her 16-year-old son after he had been sent to the vice-principal’s office Monday morning.

“I said why? I said it’s a symbol of Southern pride for standing up for what you believe in, why would you be punished for this?”

Matthews said she gave her son the Confederate flag shirt, written on the front is a message, “If this offends you, you need a history lesson.”

Baker said the flags are a sign of support, it’s her way to show her Southern pride, “People just think it’s racism and it’s not.”

Matthews agreed, her son is not racist and he’s not pro-slavery, “This country was founded on equality and it’s not happening in our public school system.”

Mathews said the school has unfairly taken away her son’s right to freely express himself. “He wore a piece of clothing with an emblem on it his has worn many of times, others students have worn many of times throughout the years.”

Matthews said some students’ rights have been violated in favor of someone else’s, and that’s just not fair, “They’re being told they can’t do it because it offends somebody else but where is their rights?”

According to Matthews lots of students and groups of students wear outfits others may find offensive but the school has never punished those kids. Matthews said, “Other kids that have not been disciplined for basically the same action but not the same emblem.”

The superintendent of the Union School Corporation told ABC 57 News the decision to ban the Confederate flag stands, but the battle over this issue continues.

Matthews said, “I never thought I would live to see that day where I thought I’d have to fight for my child’s civil rights in these United States, in a public school system.”

It seems the fight has only just begun, students made nearly 40 Confederate flag shirts to wear to school on Wednesday in protest of the school’s dress code.

Rumors circulated throughout the high school that any student who wears one of the shirts will be expelled, but despite the threat the planned rebellion is still scheduled to take place on Wednesday.