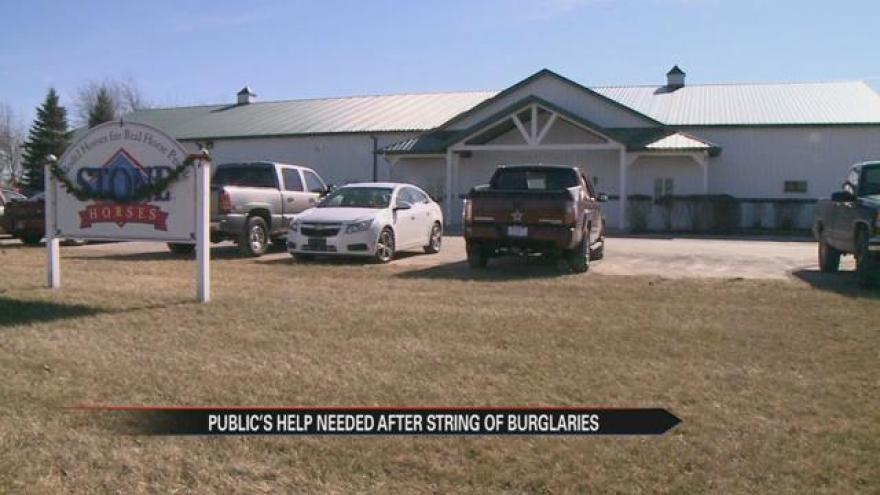 Police responded to a string of burglaries in the last two months in Shipshewana. It was at a horse model company in Shipshewana that police responded to in the early morning hours of January 19th where Heidi Sisco says she has an uneasy feeling about working late after it was burglarized along with four other businesses on that road.

“You just have people coming along and stealing from you. Is it just gonna be businesses they’re attacking or are they gonna move on to residential homes?” asked Heidi Sisco, a sales team employee at Peter Stone Company in Shipshewana.

Heidi Sisco doesn’t plan on staying after hours at her job anymore after a string of burglaries in Shipshewana.

“Shipshewana is a quiet area. Things are pretty low key here it’s the kind of like a Mayberry type place that you don’t expect this to be happening,” said Sisco.

Between December 22nd and February 10th, nine different burglaries have been investigated. Five of those break-ins happened on January 19th, including her employer - Peter Stone Company on North Village Drive.

“They came in through our backdoor and they had kicked the door in and then the major amount of damage was in the general manager’s office and they kicked his door in,” said Sisco.

And they didn’t stop there.

“And then they had vandalized the owners office,” said Sisco.

When police arrived that morning, they could tell right away what happened.

“There was still snow on the ground so they could tell by the footprints in the ground where they had entered the building and just did a walk through, did a list of inventory of what was missing,” said Sisco.

Other employees tell me off camera that petty cash was stolen, but they’re still confused because some of their credit cards and checkbooks were lying out, but were left behind.

“They didn’t take any of our stock or destroy any of our models. It was more paper, work type of things, and some cash on hand,” said Sisco.

“They are worried about it happening again I know that they’re looking into some security systems, doing some upgrades and getting some cameras,” said Sisco.

She just hopes it can calm fears, but she’s not convinced just yet.

“This is something that could happen to any business. It just puts a bad taste in your mouth, it makes it hard to feel confident in the public,” said Sisco.

Shipshewana Police are asking for the public’s help. They say they’re specifically looking for eyewitnesses or someone who may have seen a vehicle or suspect during those burglaries. For now, no suspects have been arrested.