NIPSCO says prove it was our fault! 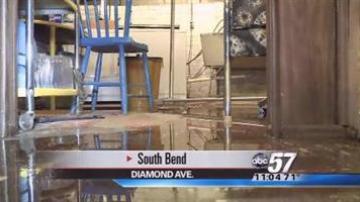 SOUTH BEND, Ind. -- A utility company wants a local family to prove it ruined their basement.  Bertha Brown says the Diamond Avenue construction project in South Bend flooded her basement.  NISPCO foreman said he is not buying it.

Reverend Greg Brown says he could not believe it when he went downstairs and saw his mother's basement flooded.

He says he knew right away the flood had to have been caused by workers digging deep holes along his mother's waterline in her front yard.  So he went to the foreman of NISPCO to tell him about the soaked basement.

"He said what is the problem. I said there is water backing up from the sewer line. He said is it bad and Isaid ya it's been happening since yesterday," said Brown.

Brown told the foreman his mother has not had water in her basement for twenty years, until a few days ago.  So the foreman went to the house to check it out himself.

"At ninety inches he said was trying to determine the height of the line they ran to the water drain", said Brown.

The foreman told Brown it was not there fault, because the line they put in the ground was 28 inches above Brown's water drain.  They told Brown to call the sewage department.

"He said at the street there is some blockage," said Brown

Brown called the city's sewage department and they came out right away and determined there was not a blockage.  So Nipsco told Brown to call a plumber.

Brown saidhe should not have to prove it is NIPSCO's fault and he says water flooding his mother's basement after Nipsco dug deep holes near her waterline, is not a coincidence.

The plumber is set to come Thursday.