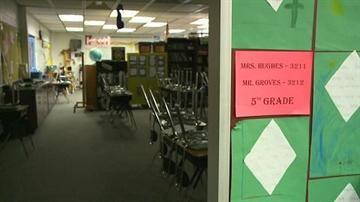 BUCHANAN, Mich. – A multi-million dollar bond issue, that would have helped several schools in the Buchanan Community School District, was defeated for the second time.

Tuesday, voters decided $19.5 million was too much to pay for school improvements at two elementary schools, as well as the middle and high school.

A similar measure was defeated in May 2011. That bond issue sought $31 million from the taxpayers.

According to school board member David Zelmer, the defeat in 2011 was taken into account and the proposal was restructured to cost less while attempting to cover the same needs.

This year, more people voted on the proposal than last year.

Voter turnout was up at every single precinct where this issue was on the ballot.

And while supporters of the proposal did convince more City of Buchanan precinct voters to support the bond issue (226 and 192 yes votes vs 223 and 185 no votes respectively in City of Buchanan #1 and #2 precincts), as was the case last time the downfall of the measure came from precincts outside the city limits.

Buchanan precinct #1 and #2 showed huge growth both for and against; picking up an additional 142 yes votes and 114 extra no votes.

Niles precinct #1 nearly doubled the number of votes in both yes and no columns going from 37 to 69 and 38 to 72 respectively.

Oronoko Charter saw little change in voter turnout for the bond issue, picking up a single extra no vote this year over last. A total of 5 people cast a vote in that precinct.

Finally, the Bertrand precinct showed the kind of movement supporters wanted see, just not quite enough.

Fifty fewer voters opposed the proposal this time around, but only 17 new supporters voted to assist the school district.

It is clear; voters still don’t feel like shelling out extra money to assist the district.

According to the district Superintendent, some people were under the impression it would cost them hundreds of dollars a year to support the bond.

Some, like Buchanan Middle School Principal Mark Kurland consider that a small price to pay to ensure the children going to school are given the best chance to succeed.

A tour of the middle school turned up several issues that the bond issue would have addressed.

First, the building is one of only a few open-air layouts still being used in Michigan schools.

A science classroom sets right next to a social studies classroom, and the only thing stopping noise from traveling from one to the other is a row of movable closets and bookshelves.

According to Kurland, sound from lessons one classroom over bleed into neighboring classrooms making it difficult for some students to pay attention.

Meanwhile, overhead signs of a leaking roof spoil the ceiling tiles, sporadically throughout the building.

But nowhere is the water damage more distressing for Kurland than in one of the computer labs.

In addition to the leaking roof, the buildings infrastructure is not capable of handling high amounts of internet traffic.

Currently, only a fraction of the computers in the school can try to access the net at any one given time; and it takes teachers 2-3 weeks to get their students tested online, where it could take 2-3 days.

Now that the bond issue has failed a second time, school officials will go back to the drawing board to try and find a way to convince parents and the community the money they spend on the school will ultimately benefit the students.
Share this article: