No charges in case of dead puppies 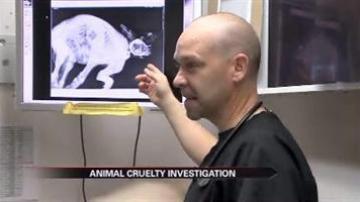 SOUTH BEND, Ind. -- In August, an Animal Control officer discovered several puppies dead, possibly beaten to death, at a home on Ironwood Road. The St. Joseph County Prosecutor’s Office still hasn’t decided what to do about the case.

When Animal Control Officer Brad Braydon arrived at a home on south Ironwood Drive, he knew something was wrong.

"It was evident because I have smelled it a number of times; there was death somewhere,” said Braydon.

It didn't take him long to find it.

"Sure enough there were three dead puppies; one of the most gruesome sights I've ever seen,” said Braydon.

The dead puppies were weimaraners.

"I couldn't even tell they were puppies other than the fact they had bodies of puppies. The heads were so mangled it was hard to tell that they were even dogs,” said Braydon.

Dr Chris Payton at the Western Veterinary Clinic took x-rays of the puppies after they were found.

He noticed one puppy’s neck was not only broken, it was decapitated.

We asked if those injuries could have been caused by the dog being hit by a car.

“That's definitely possible. There is no way to tell for sure, these injuries could have been sustained from anything,” said Payton. "If it was hit by a car, usually you would see some type of bruising, some external skin trauma on the body, things like that."

Those signs weren’t evident on the puppies.

That’s why Braydon believes abuse led to their deaths.

He has a warning for negligent pet owners.

"If you do this to your animals, I'm going to find you, especially if you're in the city of South Bend, because I won't put up with this,” said Braydon.

Officer Braydon found the dead puppies on August 24th. A warrant to remove the other dogs from the home was given about a week later.

Since then, there has been no word from the St  Joseph County Prosecutor’s Office about whether or not charges would be filed against the owners.