No one claims responsibility for park trash 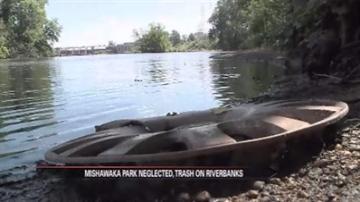 MISHAWAKA, Ind. -- Laing Park on Lincolnway East is right next to the St. Joseph River. Over the years, the area has become a popular fishing spot. Recently the park has been littered with trash and we wanted to know why.

According to city and state officials, the area is cleaned every two weeks. But even then - they have limitations.

The city of Mishawaka says they take care of trash if it's located on land, the DNR says they watch for anything in the water.

So if any litter is left on the riverbank, no one is responsible for cleaning it up.

That lack of accountability is frustrating some anglers.

Holland says something needs to be done about it.

Visitors have a personal responsibility to clean up after themselves, but not everyone does, so he thinks the city should intervene.

"If they would walk down here and see this, I'm sure it'd get cleaned up, but they're not going to. They're going to stay in their little SUV, and drive around town and let people see them, act like they're doing something. The hardest thing they do is go to lunch," said Holland.

Officials say they would clean the riverbanks if they could, but because they don't own the land - they say they can't.

The park also has an older cemetery. That's reason enough people say that it should be kept extra clean.