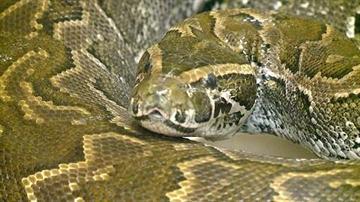 BRISTOL, Ind. – The 12-foot African rock python was unmoving on the cool cement floor of the holding cell at the Elkhart County Humane Society. Just a few feet away from the 150 pounds of pure bone crushing muscle, small dogs and cats, oblivious to the snake, were crying for attention.

Slowly, the large snake began to take notice of its visitors, a reporter; the shelter’s director; and an employee with a background in amphibians and reptiles. It was not happy we had disturbed its slumber.

Matt Harmon has a degree in Wildlife Ecology, and works at the Humane Society. His affinity for reptiles made him the perfect person to deal with the snake after it was brought in.

Between his fiancé and himself, they were able to identify the snake relatively quickly. It was clear the snake was large bodied, which put it into the constrictor class. Then, a check of the width of the head and the markings on its scales, and the duo had their answer.

The African rock python uses its erratic scale coloring to its advantage in its natural habitat, the African Savannah. Tall grass hides it’s movements as it slides through them blending in as if wearing camouflage.

In November of 2002, a 20-foot African rock python was hunted in South Africa, after it killed and devoured a 10-year-old boy.

The species is known to be aggressive, and Harmon doesn’t know who would want one as a pet. He says it is obvious someone purchased the snake as it is not indigenous to northern Indiana.

Harmon also says the snake is an invasive species in Florida. In recent years, several types of pythons have been released or have escaped into the Everglades. There they have multiplied and have begun to alter the ecological balance.

One report out of Florida mentions a python attacking and killing an alligator, then killing itself when it tried to eat the beast. Other tales involving pythons causing the death of children are also present.

According to the Humane Society’s director, this python used to belong to a man who recently died. His surviving spouse then gave the 12-foot snake to another family.

She says, the family’s teenage children were playing with it, outside, when police stopped by. In a panic, the kids dropped the snake in the grass.

The director says the family does not want the aggressive reptile back, as they have not come forward to retrieve it. Meanwhile, the Chicago Herpetological Society has agreed to take the snake off of the Humane Society’s hands.

The snake’s journey is troubling for Harmon who says this is something that not just the Humane Society is dealing with. “The pet trade is something that looms over our heads here at the shelter. Especially with the exotics, and I saw it in the zoo-world as well, people bring in animals that they just aren’t prepared to take care of,” said Harmon.

Given the opportunity, the 12-foot python could strike a fully grown adult, sinking its teeth into them and essentially locking them onto their victim. The bite itself would not kill you, but what comes next most certainly could.

Rib bones would snap as the snake squeezed, its grip tightening around you. Eventually you would suffocate from lack of oxygen.

A fully grown adult would be too big for a 12-foot python to consume, says Harmon. He could not say the same for infants and small children.

To make matters worse, African rock pythons can lay a clutch of eggs totaling up to 100. Luckily, the winters are too cold here for them to survive in the wild, according to Harmon.

He says, the only way they could survive would be to find a nice warm basement to slip into pseudo-hibernation.

As for this particular python, it won’t be staying here in Michiana long. The CHS is coming to pick the snake up on Thursday morning.

It will soon have a new home, where it will be safe to live out the remainder of its life without putting anyone else in danger.