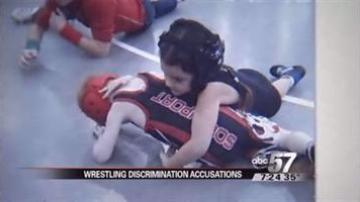 NOBLESVILLE, Ind. -- Parents say it was sex discrimination that kept their daughter from wrestling at a tournament in Noblesville.

The Maloney Family said their daughter, Adriene, was banned from wrestling boys at a tournament Northeast of Indianapolis on Sunday because of her gender.

Michael Maloney is also a coach. He was upset by the decision and says he knows it's because other parents spoke out.

"As soon as we were told, she cried for an hour,” said Maloney. “As a dad it was hard. As a coach, it was even worse because you never want to tell your guys that they can't go and wrestle, especially for something as idiotic as girls not being able to wrestle boys,"

Event organizers say they kept girls from competing on Sunday for reasons other than gender.