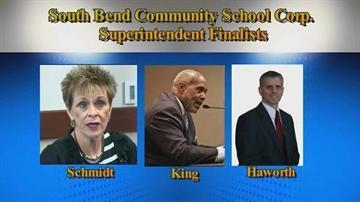 SOUTH BEND, Ind. -- The South Bend Community School Corporation released the names of the three finalists in the running as the next superintendent.  There was a fourth finalist, but that individual withdrew from consideration late Wednesday night.

South Bend School Trustees used a recruitment firm, McPherson & Jacobs Executive Recruitment, to compile a list of 19 individuals from which these three were selected.

In 2010 Schmidt and the school district signed a separation agreement terminating her position. After that she began working in Waterford, Michigan as Deputy Superintendent of Instructional Services at Oakland Schools.

In June 2011, she was named the interim superintendent of SBCSC; at the time ABC 57 was told it was a temporary position and that Schmidt was not going to be considered for the permanent superintendent role.

Earlier this week, school board president Roger Parent told ABC 57, the recruitment firm changed their mind and allowed Schmidt to apply. Schmidt has also been a superintendent in Kalamazoo.

Haworth has worked as an Indiana school superintendent before. In 2006 he was hired in Warsaw and stayed with the district two years before parting ways with them.

During his time as superintendent, ISTEP results were brought into question over irregularities. An investigation by Haworth uncovered potential cheating when an elementary principal asked a special education teacher to administer a part of the test a second time after they did poorly the first time.

The teacher was instructed to write the students answers on a separate sheet. It was never proven the answers were changed on the graded tests, and the principal resigned after the investigation.

In 2008, he was named Vice President of the National Association of Intercollegiate Athletics, and was the administrator for their Champions of Character programs.

In August 2010 he returned to Indiana schools, becoming the assistant superintendent of secondary education for Valparaiso School District.

King recently concluded his first and only contract with the Muncie School District. The contract was for three years and was paid $168,343 in 2011.

During his time in Muncie, King was also collecting $166,608 in pension from the state of Illinois after retiring from a South Cook school district. A loophole in Illinois state law allows him to draw on the pension even though he is working full-time in another state.

Also during his time in Muncie, a 16-year-old girl was allegedly raped at one of the high schools in King’s district. The rape was not reported to the police immediately by the school principal, and the fallout left parents upset over how it was handled.

Finally, in 2006 King was forced to resign his elected position as Trustee for Oak Park, which he held for nine years, after it was revealed he held dual residency for three years. From 2003 to 2006, King lived in Tinley Park; within walking distance of his job.

No one challenged his residency during the 2005 election, but the board found out and knew about the issue for five months before it was rectified.

All three candidates are scheduled to interview with the school board next week, starting Monday at 8:30 a.m. The candidates will then meet with students, teachers, and community leaders.

James Capsa was the former superintendent.  He retired this past summer.

For more information about the superintendent search, you can go to the South Bend Community School Corporation's dedicated webpage.