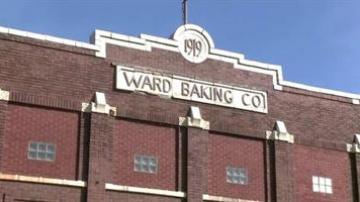 SOUTH BEND, Ind. -- A non-profit is hoping the city of South Bend will grant them a short term tax abatement so they can turn an eyesore into apartments. Near Northwest Neighborhood Inc . has already renovated several homes in the area and they hope to do the same to the former Ward Bakery building.

The Ward Bakery building was built in 1919. It was most recently the home to Ford Distribution.

Now it's just an eyesore.

"It sat in a condition that has really been kind of a thorn in the neighborhood's side for quite some time," said Karen Ainsley, Executive Director of Near Northwest Neighborhood Inc.

The NNN plans to rehab the building and turn it into 42 apartments of affordable housing.

They hope to work with a private developer to do the estimated $8 million renovations.

It's a drastic change from their previous projects.

"Our houses are big; they're more equipped for families; so this is really going to give us an opportunity to attract a different population to the neighborhood," said Ainsley.

Ainsley hopes the benefits of the project will help not only the neighborhood, but her organization as well. She hopes to see continued sales of homes they are fixing-up nearby.

"We see it as a really nice feeder system for our homes that we rehab. So people, they'll come into that community of the rental community that is going to be so close to our offices, so close to all of the activities that are vibrant here in the neighborhood. And then hopefully as time goes on we'll be able to get them if they are in a position to think about home ownership and think about the other opportunities that are here in the neighborhood," said Ainsley.

But according to ainsley, they can only do the renovation if the taxes are forgiven for the first few years.

"The tax credits are essential. It's the way that you're going to leverage and attract that private investment. The project outside of a tax abatement is being done 100 percent with private dollars, so that is the only public funds being injected at this point," said Ainsley.

Ainsely says the tax abatement would only be for about three years.

Common Council members Valerie Schey and Henry Davis Jr have already voted against the project once.

It is up for a vote at the next council meeting.

Davis says he isn't opposed to rehabbing the building, he wants to see more local contractors on the $8 million project.