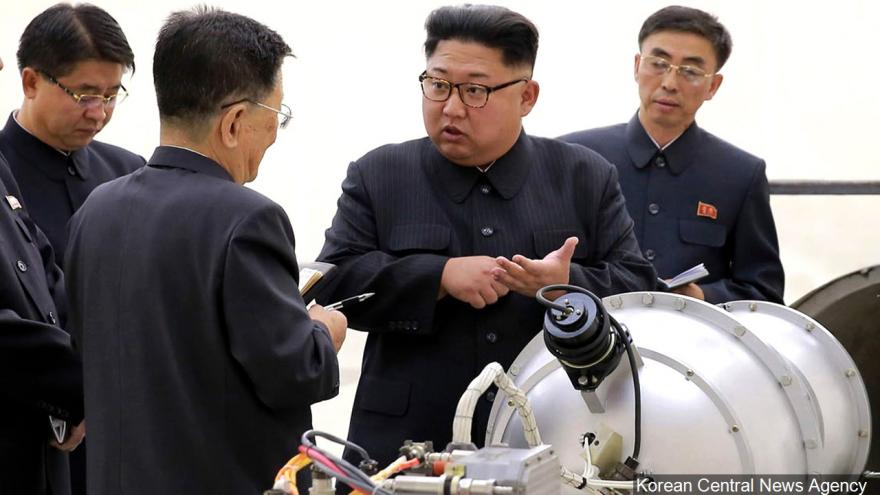 (CNN) -- North Korea has warned the United States that it will pay a "due price" if harsh sanctions against the country are agreed at a United Nations Security Council meeting on Monday.

North Korea's Foreign Ministry said in a statement published on state media that if the US "does rig up the illegal and unlawful 'resolution'" it would respond in kind.

The Security Council is due to vote in New York on a US-drafted resolution to impose new restrictions on the rogue state following its sixth and largest nuclear test, carried out just over a week ago.

"The DPRK is ready and willing to use any form of ultimate means," the statement said, referring to the country by its acronym.

"The forthcoming measures to be taken by the DPRK will cause the US the greatest pain and suffering it had ever gone through in its entire history."

US puts forward another draft resolution

The US put forward another draft resolution Monday that made considerable changes to a previous version of the proposal.

The latest draft removes a call for a full oil embargo on the country and omits the freezing of assets and a call for a travel ban for North Korean leader, Kim Jong Un. The new draft also softens its language on foreign workers and other issues.

A previously circulated version of the US resolution called for a full ban on exports of oil to North Korea and an asset freeze on Kim, the Worker's Party and government of North Korea.

The Reuters news agency reported Monday that the initial US proposals had been watered down, citing a new version of the draft resolution. The report also said that the sanctions had been softened to appease China and Russia, citing diplomats.

Russia and China both have veto power in the vote as permanent members of the Security Council. Both had expressed skepticism over the strict sanctions.

China -- North Korea's most powerful ally -- said Monday that it supported the Security Council's plan for a "further response" to North Korea and to take "necessary actions."

"We hope UNSC members will come to a consensus through full consultations and will send out the voice of unity and solidarity," Chinese Foreign Ministry spokesperson Geng Shuang said at regular press conference Monday.

"The UNSC's response and actions should be helpful to the denuclearization of the Korean Peninsula and to maintaining the stability of the region. And also helpful to solve the North Korea issue peacefully," Geng said.

The US and its allies have been calling for stern measures against North Korea since the September 3 nuclear test.

The test sent powerful tremors across the region, suggesting the device used was the most powerful the nation has ever tested. Pyongyang claims it tested a hydrogen bomb capable of sitting atop a ballistic missile.

Despite the impending vote on potentially painful economic sanctions, the atmosphere in Pyongyang over the weekend was one of celebration.

North Korea commemorated the 69th anniversary of its founding on Saturday, holding large patriotic displays of dancing and devotion to the Kim family.

Speaking to CNN reporters, North Koreans on the street appeared unconcerned about further sanctions and threats of military action from the United States.

"We know the Americans may come back with many more sanctions but in response we Koreans will continue shooting up many more missiles and conducting many more H-bomb tests," North Korean shop assistant Han Myong Sim told CNN's Will Ripley.

"We don't worry very much," said another shop worker, Ri Jong Ok. "As long as we have Kim Jong Un, we'll survive."

Among the celebrations was a gala event in honor of North Korea's nuclear scientists, who successfully conducted the country's sixth nuclear test.

North Korean leader Kim attended the glitzy event himself, where footage purportedly showing the explosion was played, accompanied by a full string orchestra.

Speaking on Monday, South Korea's Foreign Minister Kang Kyung-wha said North Korea's nuclear arsenal was "the biggest challenge to our foreign affairs and security front and will continue to be so for many years to come."

But Kang added both the US and South Korea believed in following a policy of "responding firmly (to) provocations through tough sanctions while leaving the door open for dialogue."

Over the weekend, leaders in Germany and France waded into the escalating crisis.

German Chancellor Angela Merkel said in an interview with a German newspaper she would "immediately say yes" if Germany was asked to help end the crisis.

She said an agreement similar to the Iranian nuclear deal struck under the Obama administration could be the solution. Under the deal, Iran agreed to scale back its nuclear program in exchange for sanctions relief.

"I could imagine such a format being used to end the North Korea conflict. Europe and especially Germany should be prepared to play a very active part in that," Merkel told Frankfurter Allgemeine Sonntagszeitung in an interview published Sunday.

French President Emmanuel Macron spoke on the phone with US President Donald Trump and Japanese Prime Minister Shinzo Abe on Saturday to discuss the possibility of new sanctions.

"(They discussed) a firm and united reaction towards North Korea's repeated provocations as it is a threat to world peace and security," the Elysee Palace told CNN.