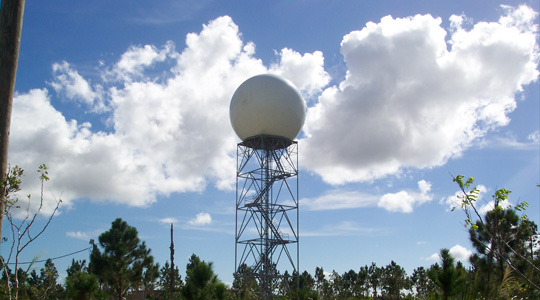 National Weather Service WSR-88D radar. NOAA
Something that will go unnoticed for a majority of us who don't use radar apps like RadarScope has gotten underway as of Monday afternoon at the National Weather Service office in Syracuse, Indiana. The WSR-88D radar is being updated to increase its longevity and reliability. This, in turn, will help the NWS protect life and property.

"Our office is one of the last ones going through this. the radar will be down all week. And it's scheduled to back by the end of Rriday. Everything should be back up and running and good to go," says NWS Northern Indiana meteorologist Lonnie Fisher.

He's referring to the radar used by the National Weather Service in Syracuse, Indiana -- the one that covers all of Michiana. It'll be down through at least March 23rd so technicians can enter the radar site and install a new signal processor, which replaces old technology, improves processing speed and data quality-among other things.

"There's a lot of parts that are just, you know, prone to failure, and have issues, of course, as they get older. So a lot of this is just updating that equipment and making sure that the radar is going to last another 20 to 30 years," Fisher says.

This temporary shut-down of the radar is just one part of a $150 million investment being made by the NWS, the United States Air Force and the Federal Aviation Administration.

"This is going to be the first of four major updates that will be coming over the next many years. Again, all of the radar sites are going through this. Nothing unique just to our site.”

And despite the nearest radar to Michiana being down, the NWS will still be fully functional.

"There is still radar coverage. Of course we've got weather service offices around us that provide coverage when an adjacent site is down. So don't think that because our radar is down, there's no coverage and we can't see anything going on. We are still able to see everything and we're still able to issue our forecasts and whatever we need to do.”

Radar sites in Grand Rapids, Chicago, Detroit, Indianapolis, Cleveland, and Wilmington, Ohio, will be used by the NWS in Northern Indiana through Friday to ensure the area stays safe from any possible threatening weather. The good news, however, is that the weather should be mainly quiet during this stretch for much of northern Indiana, southern Michigan and northwest Ohio. The only exception will be Tuesday night into Wednesday morning. Some snow is expected to fall during that time across parts of northeast Indiana and northwest Ohio.