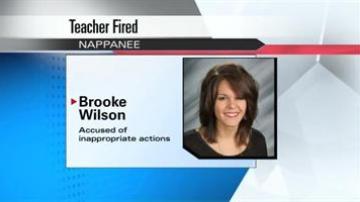 NAPPANEE, Ind. -- The contract of a teacher at NorthWood High School was canceled after allegations surfaced there was inappropriate conduct between her and a male student.

The school corporation learned of the allegations on September 25 and Spanish teacher Brooke Wilson was suspended immediately.

During the suspension, she was prohibited from interacting with students and from being on school grounds.

Her contract was canceled at Monday night's school board meeting.

We tried to find out what happened and spoke to several students from NorthWood High School.

"Most of what I heard is that she was snap chatting student and someone reported her," said Austin Saffel, a student at NorthWood High School.

Many of the students at NorthWood High School seemed sad about what happened.

"I never had her, and I was going to have her next trimester and I was kind of disappointed because I heard she was a good teacher," said student Riley Gratner.

The school corporation would not comment further or release any details of the case.

They did say they submitted the proper reports to the appropriate authorities.