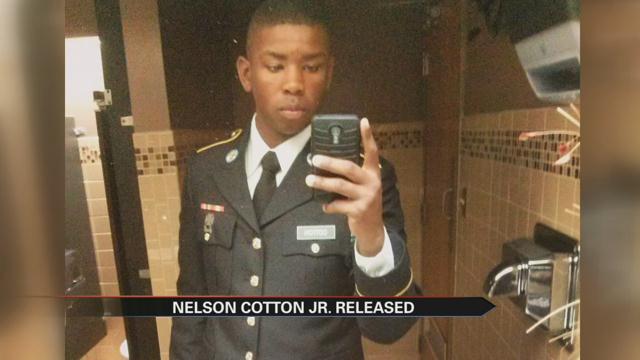 The South Bend man charged with murdering his sister’s ex-boyfriend back in April is now free after being found not guilty by a jury.

He said his son is now out of town, spending time with his girlfriend.

His father did not want to speak on camera, but he said he is thankful his son is free.

She said her family is heartbroken over the verdict, but they did not want to speak publicly about the case anymore.

The video shows Cotton opening the driver’s side door and seeming to struggle with Williams, a father of five.

Prosecutors say Williams had been talking with his ex-girlfriend, who is Cotton’s sister, moments earlier.

In the video, the car’s brake lights turn on twice as the men interact, before the car rolls forward, eventually accelerating straight into an apartment, as Cotton stands watching.

Seconds after the crash, Cotton is seen running off the left side of the screen.

Police later found Williams dead inside the vehicle from a gunshot wound.

Autopsy results said the bullet that killed him was fired from someone outside the car on the driver’s side.

Police later confirmed no gun was in the car before the shooting.

Cotton was arrested and charged with felony murder the next day, after his sister admitted to police he had fired the shot.

But on Thursday, a jury found Cotton – a military veteran – not guilty.

He was released from jail Thursday evening.

The prosecutor’s office said it’s disappointed with the verdict, but a spokeswoman said they respect the jury’s decision.

She also said there are no other suspects being sought in Williams’ death; and it was not suicide.