Notre Dame and Michigan fans celebrate the end of an era 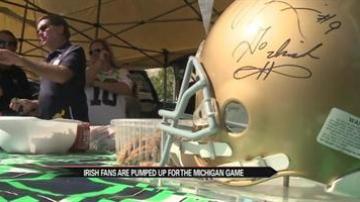 Adam Gifford said, “It’s sad to see the end of it but I think in a few years we’ll get it back going again and it’s two great academic institutions and that’s what you like to see.”

For the Gifford family, they have a divided house. Mick went to Michigan and his nephew graduated from Notre Dame.

Today they celebrated the history they've experienced together.

Adam Gifford said, “It goes back to the 1800's I believe when we asked Michigan for a little help to understand the game of football and from then on it became a rivalry, and I’m sad to see it go.”

But while one era is ending, fans were excited about a new one that is just beginning.

Eric Phillips said, “It’s a great tradition. The best in sports history no doubt. And we are going to kill them tonight. Plain and simple. Everett Golson is going to throw for 900 yards.”

There was also a group of Notre Dame graduates celebrating the last bachelor standing among their group of friends.

Jim Arkedis said during their senior year they started contributing to a pool of money for the last one of their friends to get married.

This weekend Arkedis won the big bucks because he is the last bachelor among 25 people who were contributing to the pool.

Jim Arkedis said, “It’s incredible. It’s basically everything I’ve hoped and dreamed for. I have basically monetized my ability to speak to the opposite sex, and so here we are.”

And this weekend his group of friends celebrated his victory by tailgating at the Notre Dame game.