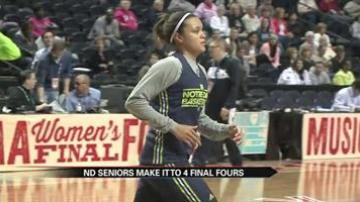 NASHVILLE, Tenn. -- Notre Dame and UConn will face off for the first time this season in Tuesday night's NCAA women's basketball National Championship game. Both teams are undefeated.

Head Coach Muffet McGraw says although UConn and Notre Dame have a deep respect for each other, the two teams have a fierce rivalry.

"All of this, all of the talk about UConn, you turn on the TV, you hear about UConn and so I think you just want to be the one that can upset them," said McGraw.

After beating UConn three times in the regular season last year, the Irish fell to the Huskies in the final four.

For the seniors, that wound is still fresh.

"It's always been competitive and it's always been a great rivalry. I know coming in, it's these are your rivals and at the end of the day we don't like them," said Irish forward Natalie Achonwa.

The underclassmen say they understand they've inherited a tumultuous history between the two teams.

They say they are just as hungry for a victory as the seniors.

UConn's Bria Hartley says they will work hard to win again this year.

"Everyone's been talking about this matchup and everyone's been wanting to beat us just because we won last year. But I feel like we just take it one game at a time and focus on that opponent and the basketball aspect that stuff doesn't get in the way," said Hartley.