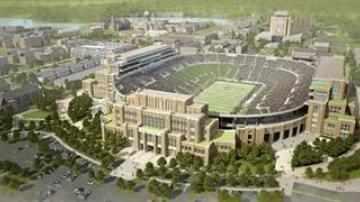 In addition to the new buildings, they will add 80 new positions.

The three new buildings will be attached to the east, west and south sides of the football stadium.

The project will begin in two years and will take nearly 3 years to complete.

The West building will be nine stories tall and will include meeting rooms, recreational sports and fitness facilities, a ballroom, club seating for football, premium stadium seats and terraces that will look out onto the football field and campus.

The South building will house the Department of Music and Sacred Music program. The building will have recital and rehearsal halls, a music library, a club/lounge, practice rooms and much more.

The East building will house the departments of Anthropology and Psychology. It will have a media center, a 2000 square foot studio, offices, labs, classrooms, outdoor club seating for football, outdoor terraces , a press box, radio booths and club area with premium seating.

Combined the east and west buildings will add 3,000 to 4,000 premium seats to the football stadium.

Those against the new plan say it will take away from the iconic image of the stadium.

"It actually, I think, is going to really enhance the aesthetics of the stadium itself and make it a more attractive building on campus," said Dennis Brown, spokesman for Notre Dame.

Not only will the university benefit, it will put a lot of people to work.

"We think the most immediate impact will be on the construction trades. We'll have more than 300 workers per day out there when the project is at its peak," said Brown.

Watch a 360-degree tour below.