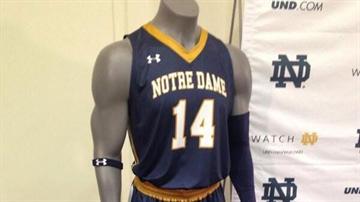 NOTRE DAME, Ind. -- Notre Dame Director of Athletics Jack Swarbrick spoke to the media Tuesday morning and announced the university has reached a deal with Under Armour that is the largest deal in college athletics.

For the duration of the ten year contract, Under Armour will provide footwear, apparel and equipment for training and game-day uniforms for all of the university's varsity teams.

The cash component of the deal gives Notre Dame the option of owning Under Armour stock.

Notre Dame has been partners with Adidas since 1997.

"We couldn't be more excited about this opportunity, and by any measure, it's the largest deal of its kind in the history of collegiate athletics," said Swarbrick.

The deal is reportedly worth about $90 million, according to ESPN's Darren Rovell.

Under Armour will provide footwear, apparel and equipment.

"For us to be hoisting National Championship trophies in Under Armour gear takes resources, and Under Armour understands that. And on an apparel front, an equipment front, a cash front, they're prepared to make that available to us," said Swarbrick.

Swarbrick says Under Armour's commitment to technology is key to navigating the future of college athletics.

"I think that we will impact our culture in direct ways, make us more creative, inventive, allow us to move more quickly and to be fundamentally entrepreneurial," said Swarbrick.