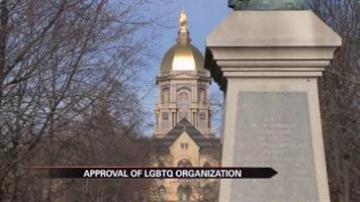 SOUTH BEND -- The University of Notre Dame announced Wednesday that it approved a LGBTQ student organization. The university says this is to expand the support and services for students who identify themselves as gay, lesbian, bisexual, transgender and questioning.

Many students, like senior Karl Abad, come to Notre Dame with a mission.

"I actually came here initially as a freshman because I felt that Notre Dame needed the most work. It was rated number one unfriendly gay university at the time. So I've been involved since a freshman and I did not think this would be happening by the time I graduated,” said Abad.

"I think for future students they can actually truthfully call this place home,” said Abad.

In the release, the university said "Notre Dame's goal remains to create and sustain a welcoming and inclusive environment for all students."

"It’s a bit stifling if you don't fit the cookie cutter straight white male standards. You feel kind of othered (sic) as a part of the community. I think with this new student organization I think that atmosphere will definitely change,” said Abad.

Helping to make that change was student Alex Coccia.

"Really it is about what students, faculty, administrators, staff were able to do together,” said Coccia.

Coccia says the very first application of a Gay Straight Alliance they know of was in 1986.

“Ultimately the one that we put forward with a proposal this past year was started in the early 2000s,” said Coccia.

Coccia was part of the 5 month review process with university officials.

He says now they're looking towards the next step.

Both students hope this change will help the next group of students who want to call Notre Dame home.

Notre Dame will be hiring a full-time student development staff member that will oversee the program and make sure it's within the teaching of the church.

The organization will be open to any student and Coccia said they hope it's fully operational by next fall.