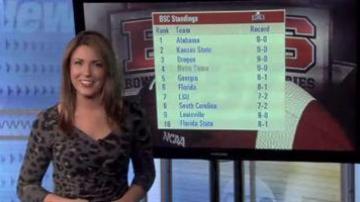 The senior told us even he started to lose faith after the Irish were still trailing late in the fourth quarter.

"After the interception in the end zone I thought it was over," he added.

The Irish rallied for a triple overtime win 29-26, but they didn’t get a boost in the BCS Standings released Sunday night.

Notre Dame fell back one spot to No. 4 and fans are paying close attention hoping to get an invite to the national championship game.

"I follow it almost daily," said ND senior Derek Wolf. "When the rankings come out I look at it and try to figure out how it’s going to affect Notre Dame," he added.

While Irish fans are probably still on a high from Saturday’s win others are examining the calls made in the extra playing time.

"There’s almost always a controversy after any game," said Bens, "the refs are not going to get everything right ."

Turns out during the second overtime the refs missed a penalty call on Notre Dame while Pitt missed an opportunity to score.

The Irish had two No. 2’s in the game when Pitt’s kicker Kevin Harper missed the field goal for a possible Panther win.

Both Notre Dame wide receiver Chris Brown and cornerback Bennett Jackson were in the game wearing No. 2 jerseys.

ND fans said they don’t think that affected the kick, but they could understand why others would care.

"I could definitely see why they would be complaining if they were a Pitt fan especially," said Bens.

In the end fans were thankful and relived for another win to continue their 9-0 season, and now they’re just hoping that tradition continues.