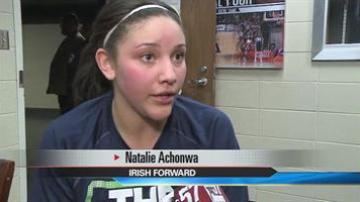 SOUTH BEND, Ind. -- The Notre Dame Fighting Irish beat the Oklahoma State cowgirls 89-72 in the third round of the NCAA Tournament.

The team got off to a strong start by scoring the first 14 points of the game.

“We were ready since 12 this morning to make sure we were focused and ready so getting off to that good start meant a lot to us,” said Sophomore Guard Jewell Lloyd.

But the game wasn’t a blowout.

Coach McGraw said she would have liked to see a bigger lead.

“We couldn’t seem to get up 20. I felt like it was 14 a lot and then maybe 12, but they never got to single digits. So we always felt comfortable but I was disappointed we had to play the starters as long as we did.”

“The support and the fans that came out today were amazing and you could hear the roar before the game and when they knocked off those lights, we were just ready to go,” said Achonwa.

The Fighting Irish will play Baylor at Notre Dame on Monday at 7:30 p.m.