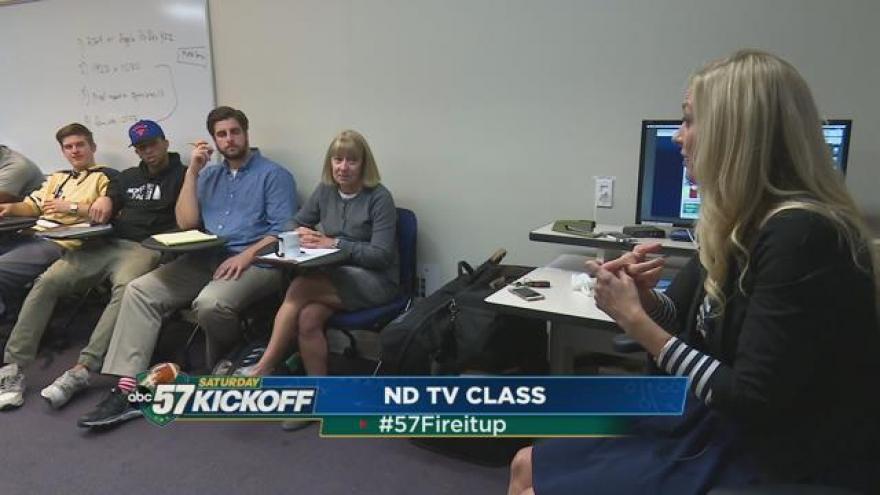 It seems like only yesterday, I was a college student at the University of Florida, dreaming of one day doing exactly what I'm doing today.

I was eager and ready to put in the hours and the hard work but I really had no idea what it was going to take to eventually make my dream a reality.

That's what Notre Dame Adjunct Instructor Karen Heisler is doing in the department of Film, Television and Theatre.

Heisler is giving students with big ideas a dose of what it's like in the real world of sports journalism.

"They think it's easy," Heisler said.

That's why Heisler created the Sports and Television class at Notre Dame.

"This class is probably in its 10th year. I created it because we have so many students who are interested into going into the television industry and in particular sports industry. We don't really teach them how to be on camera or how to be a play-by-play analyst or color commentator, we teach them how sports work on television," Heisler said.

She brings in professionals like me to give them a dose of reality.

"And it was terrible, it was as bad as you'd think it would be. But it was that foot in the door that I needed," I said.

And worked my way up to sideline reporting for the Big Ten Network and to hosting ABC57 Saturday kickoff.

"Try to get them to look at the big picture. So throughout the course of the semester sometimes you see a little light bulb go off, like 'wow, I didn't know that,'" Heisler said.

So we put them on the spot and in front of the camera. Watch the video above to see their debuts.