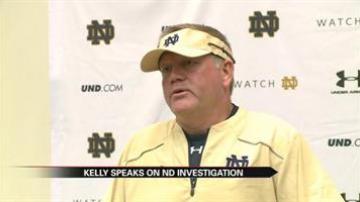 On Saturday after practice Head Coach Brian Kelly broke his silence on the investigation.

Kelly said he first learned about the investigation on Thursday.

Kelly said Athletic Director Jack Swarbrick called him into his office and notified him that DaVaris Daniels, KeiVarae Russell, Ishaq Williams and Kendall Moore were part of the investigation.

Kelly said he was shocked and disappointed.

He wanted to make clear that this is still an ongoing investigation and no one has been found guilty of anything.

The players involved cannot practice or compete with the team until the investigation is complete.

Kelly said they will likely not attend team meetings, but are allowed to eat with their teammates and spend time with them at the athletic complex.

Kelly said this is forcing him to reexamine positions on the field, but added integrity is one of the reasons he chose to work for Notre Dame.

"Along the way I’ve lost a starting quarterback and some key players, but I came here because I wanted to be associated with a university that had those standards,” said Kelly.

Just last season now-starting quarterback Everett Golson sat out the 2013 season for cheating. He was reinstated to the university and joined the team again in the spring of 2014.

Kelly said instances like the current investigation are reasons why it’s important to continue teaching student-athletes.

“I’m a parent and this is an extended family for me,” said Kelly. “I was hurt, but I know the business I’m in and I’ve got young 18 to 21 year-olds and we have to educate every day and we were back at it today.”

Kelly said he has not been given a timeline on how long the investigation could take.

He added this is another example of his ‘next man in’ motto and other players will now have to step up.

The head coach said he knows of no other current or former players being questioned, as well as no one within in his staff.