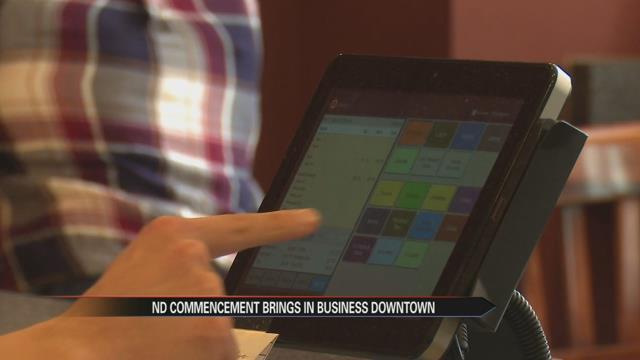 “This weekend is one of our best weekends of the year, so it’s pretty impactful,” Peg Dalton, the owner of Le Peep in South Bend, said.

“It’s probably one of the top three weekends of the year, along with our Christmas months,” Tippecanoe Place General Manager Kevin Jakel said.

“We [started] seeing a heavy influx of students really last weekend and then big groups all throughout the week,” Dalton said.

Dalton’s downtown South Bend restaurant is a favorite spot for the Fighting Irish.

“We had like 50 [Notre Dame] lacrosse players in here one day,” Dalton said. “[The students] like to do special things as they’re wrapping up their time here and hit their spots that they’ve gone to for the last four years, so we’re very fortunate to be one of those spots!”

“It probably triples our normal business week, so it’s a huge impact on sales,” Jakel said.

The weekend serves as a huge impact economically, but also sentimentally. Dalton said commencement weekend allows students to show their families around town.

“It’s fun for them to introduce once of their favorite places to their family, so, it’s neat that we’re a part of that,” Dalton said.

Each year’s commencement makes for a special weekend for both Notre Dame students and the businesses that service them.

“Notre Dame in general? We wouldn’t be here without them,” Dalton said.

Dalton and Jakel said each of their restaurants served about 500 people Friday, alone, and they said that number is only expected to rise throughout commencement weekend.