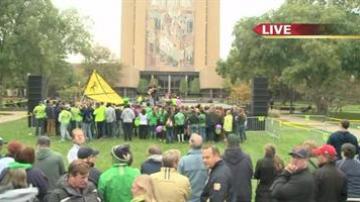 SOUTH BEND, Ind. -- Friday afternoon, students and fans began gathering for the Notre Dame pep rally. No matter who they're rooting for, all of the attendees agree with one thing - Saturday's game is the rivalry of the season.

It's a once in a lifetime opportunity.

"We came to see the USC Notre Dame game because it's one of the things you have to do in your lifetime," said Michael Endy, a Trojan alum.

A unique and historic rivalry-dating back all the way to 1926-that brings football fans together from all across the country.

"People that are both Notre Dame fans and USC fans come in from all over and I think it makes it more interesting to see the dynamics of that rivalry," said Trojan fan Craig Cox.

"It's a very friendly rivalry, it's not like it's a bitter rivalry. It's a good, clean rivalry and it's always been like that, very hospitable people here in Indiana so we appreciate that," said Cox.

"This is our biggest rivalry, I would call it a gentlemen's rivalry," said Endy.

A win could set the tone for the rest of the season for either team.

"It's a big game. It really is, at least speaking from the Notre Dame family. Our season, if we beat USC, our season is successful," said Irish fan George Peyton.

The 1988 national championship team, headed by legendary coach Lou Holtz, will be honored at the library quad. This is the 25th anniversary of their winning season.

Lou Holtz stopped by ABC57's studios to talk about his special anniversary. Watch the interview here