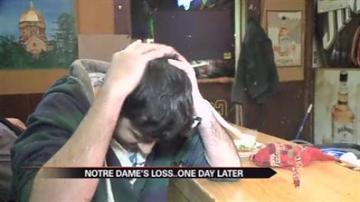 SOUTH BEND, Ind. -- Just 24 hours after Notre Dame's big loss to Alabama, many fans are feeling more blue than gold. Therapists say sports depression is a real condition that is pretty common after such a big loss.

One Alabama fan has nothing better to do than harass the workers at Corby’s Irish Pub in South Bend.

"I think he started calling when Notre Dame finally scored their first touchdown and the first thing he said was ‘Hey, it's about time,’" said Jason Zolman, manager of Corby’s Irish Pub.

Over fifty phone calls later, Zolman sits in his empty pub. With no caller id, he has no choice but to answer.

"I've had some witty comebacks for him. I've asked him how many teeth he has. Some other choice words for him,” said Zolman.

But no amount of witty banter can stop the pain, the dagger of defeat that one fan says feels like a bad breakup.

"It went from the happiest time I've ever seen in here to nobody talking, nobody doing anything,” said Thomas Seaman, a depressed fan.

“I think most people after a real substantial disappointment that they experienced in last night’s game, theyll probably get back to normal within a day or two maybe even a week,” said Daniel DeBrule, Ph.D. of the Stress Recovery Center.

The symptoms are clearly visible - agitation, feelings of worthlessness, anxiety, a loss for words.

"Finally it gave us something to look forward to in this town, You know we were in the spotlight, it was great, but everything... I don't know,” said Seaman.

DeBrule says allow yourself ample time to sulk in the man or woman cave.

DeBrule also said most people will mourn the loss of the camaraderie that had developed during Notre Dame’s undefeated season.