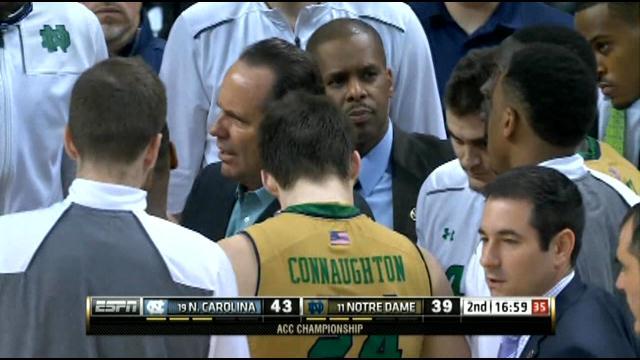 After defeating Duke on Friday, the 11th ranked Irish looked to head into the NCAA tourney on a high note Saturday night.

The Irish led at the half, but the Tar Heels bounced back.

Sunday, many teams are sitting on the edge of their seats waiting for their fate to be announced during Selection Sunday.

Irish Fans are feeling better than ever after Notre Dame pulled off the win against North Carolina for their first conference tournament championship.

The mention of the Notre Dame-North Carolina Championship game has fans at the bar smiling from ear to ear.

It has not been the easiest road for the Fighting Irish in past NCAA Tournament appearances.

In the last seven years, if they did make the tournament they were knocked out in the first or second rounds.

Fans say it is a little discouraging, but after them pulling off a huge run to seal their first conference title Saturday night, this year they mean business.

“With what they've done in the first year of the ACC, I think that beating Duke and coming off a big win against UNC in the championship, I think they're going to be coming off of a high and lookout for them in the bracket!” said Kyle Augustine, a Notre Dame fan.

Fans say the team they see this year is driven, and after coming back from being down in the second half on Saturday night, they say the heart they showed will carry them far in tournament.

Fans say people always give the Fighting Irish a tough time at this time in the season.

They hope the big names the team has taken down this year in the ACC Tournament alone will be enough to place them in a top three seed in the NCAA Tournament this year.

“Right now with being No. 11, they've beaten Duke twice, they beat North Carolina, I would say they're probably going to be a 2 or 3 seed, because other than Kentucky and a couple other schools, there aren't many they haven't beaten yet,” said  Zach Price, a Notre Dame fan.
Share this article: