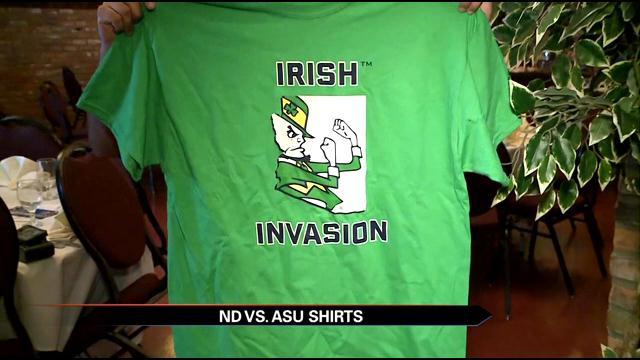 In their ninth game of the season, Notre Dame is looking to slow down the Arizona State Sun Devils. Alumni and fans are expected to fill the stands with green, blue and gold.

The Alumni Club of Phoenix is selling green t-shirts and polos in Phoenix this week so that fans can show their support.

The club says each shirt is around $20 a piece.

The money will help fund the club as well as the club's scholarship that will help a Notre Dame student from Arizona help pay for tuition.

The former club president says he hopes all the green in the stadium will also help earn a victory for the Irish on Saturday.
"Notre Dame has such a big following. We've been asking all the Notre Dame fans to wear green. It stands out, so I'm expecting to see at least 7,000 or 8,000 fans wearing green," said Marc Echeveste, former president of the Notre Dame Alumni Club of Phoenix.

This will be the fourth time the Irish face off against the Sun Devils.

Notre Dame leads the series with a 3-0 record.

Last year-the Irish won in a nail biter at AT&T Stadium in Arlington, Texas for the fifth annual Shamrock Series.