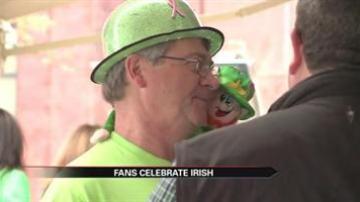 NASHVILLE, Tenn. --- Irish fans are like no other and Sunday they are painting the Music City green.

Fans were dressed in green everything, tiaras, faces and shirts.

The Fighting Irish say they had their fingers crossed for a Final Four reunion.

"We've actually been excited for about a year now when we knew there was a chance the team could be here this year so we've had our fingers crossed," said Christopher Rand, the president of the Notre Dame Alumni Club in Nashville.

"The only thing about women's basketball fans not only do they travel well but there fans are second to none. They go anywhere it takes to support the program," said Dolly Duffy, Executive Director of the Notre Dame Alumni Association.

The whole crowd was fueling up to cheer on the Irish Sunday night.

A small group of fans in the group know the players better than most.

We talked with star players Jewell Loyd and Kayla McBride's parents about soaking in another Final Four experience.

"It's great for the kids. They're experienced now that this is their 4th one. It's a lot of fun for families that we get to travel all over the country and follow our kids. It's an experience they'll have for the rest of their life," said Lamont McBride, Kayla McBride's dad.

"She's been feeling really great, confident. She's with a great team. They're really positive about working together as a team I think the team is going to get this done," said Gwen Loyd, Jewell Lyod's mom.

The Alumni Association said they plan on hosting another party on Tuesday before the championship game.