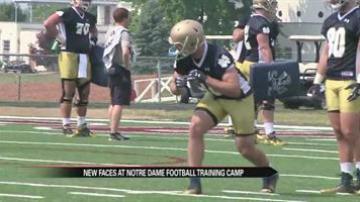 CULVER, Ind. -- Seniors on Notre Dame's football team say they believe the success of their season rides on the younger players standing out and stepping up.

Monday was their first day of training camp at Culver Academies.

Senior Ben Koyack says he takes pride in going up against the younger tight ends.

He anticipates stepping into a leadership role and continuing the Tight End U legacy.

Linebacker Joe Schmidt says he also sees the new guys growing into a vital part of the team structure.

"I tried to get a little bit bigger, do what I could to embrace the physical role I want to embrace this year, also helped to bring along some of the younger players and do what I can to teach what I know from being here for 3 years and teaching them different schemes," said Schmidt.

KeiVarae Russell says he felt the competition between the younger guys heat up and he looks forward to the team bonding through the week.

"We got guys that can run 4 3 and guys that can run 4  6 but strong at the line of scrimmage so I'm going up against wide receivers like Corey Robinson who ain't the fastest but he's 6' 5" and pretty physical at the line of scrimmage. And he kind of resembles Jaylon Strong at ASU. Not saying he's at Jaylon's level but he kind of resembles that," said Russell.