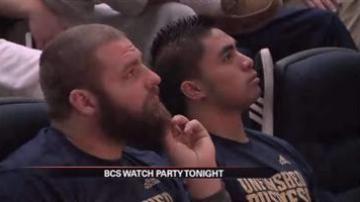 SOUTH BEND, Ind. --  It's official, the Fighting Irish are taking on the Crimson Tide in the BCS National Championship in Miami.

The standings were released Sunday night.  The BCS ranked Notre Dame with their perfect season at No. 1 and Alabama at No. 2.

“Go Irish and let’s go get them down in Miami,” said a Notre Dame student.

Students and players are fired up that the Fighting Irish are officially heading to Miami.

“I think it is a good matchup.  You have got two well-renowned, well-respected teams going at it,” said Notre Dame student Steven McDonough.

Notre Dame got its golden ticket after beating the USC last week and finishing off the regular season with a perfect, undefeated record, something pollsters never expected.

“I think Notre Dame is in the dark horse; we came into the season unranked,” said McDonough.

Alabama sealed its fate Saturday night by beating Georgia in a battle to the end, 32-28, finishing their regular season 12-1, something many saw coming.

“Alabama has been hyped all season and is said to be a good team,” said McDonough.

“I think it will be hard. Quite possibly the hardest game we have had all year,” said McDonough.

“Alabama has a great offensive line, they are very big,” said a student.

They are not paying too much attention to the noise, because they have faith the blue and gold will bring home a victory.

“Obviously a lot of people are picking against us, but here at Notre Dame, we think we are going to win. We have not been defeated yet and hopefully that continues down in Miami,” said a student.

Students at Notre Dame said everyone they know are going down to Miami for the big game, some are even staying a week and making a senior trip out of it.