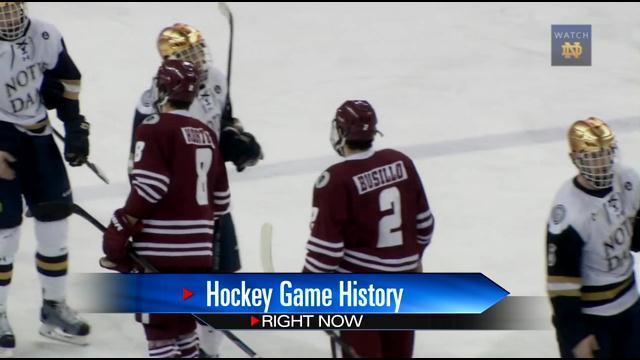 The Notre Dame hockey team kicked off the first round of tournament play at the Compton Family Ice Arena Friday night. The game, against UMass, was one for the record books.

The game was the first round of the East Tournament match up. UMass beat Notre Dame 4 to 3 using 21 of their 25 players.It was the longest game in college hockey history at 151 minutes and 42 seconds. The previous record was 150 minutes and 22 seconds.

Before that, Notre Dame's longest game was 95 minutes and 18 seconds long. It was on March 23, 2007 against Alabama-Huntsville in the first round of the NCAA tournament.

The Minutemen beat Notre Dame but not without the Irish putting up a fight. Notre Dame Goalie Cal Peterson set a record, making 87 saves while facing 91 shots.

A crowd just shy of 4,000 people attended the game. Parents of the hockey players waited at Compton Ice Arena until after 2 a.m. for the athletes.

“It was a great game. It was exciting and they played hard and they competed hard and they never gave up. I think this is the longest game in NCAA history. It's terrific I'm not a part of it (history) I just watched my son is a part of it because he played,” says David Wade, parent of Notre Dame Hockey player Justin Wade.

The game went into five overtimes.

The band played throughout the entire game.

“We got here around 6:30 when the doors opened. It was very long, it was fun, but it would have been nice if the outcome would have been different. What I thought was really nice was that the band stayed here the whole time and they kept going the whole time and kept the crowd in it so it was fun,” says Rick Hinostroza, parent of Notre Dame hockey player Vince Hinostroza.