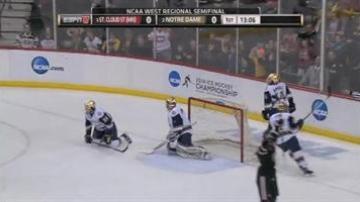 The Notre Dame hockey goaltender who leads the nation when it comes to shut outs got another big honor from his teammates.

Senior Steven Summerhays was just named most valuable player for the 2013-2014 season.

He played in 38 out of 40 games last season and set a shut-out streak for the school, not giving up a single goal during a two week stretch in February.

He is now playing pro with the Fort Wayne Comets.