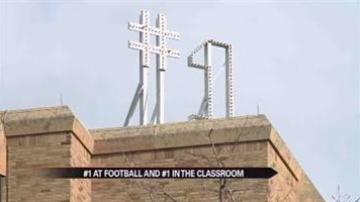 SOUTH BEND, Ind. – The Irish are No. 1 across the board and they’re making history by doing it.

Notre Dame is No. 1 in the BCS rankings and has the top spot in the NCAA’s Graduation Success Rate (GSR) rankings. This is the first time this has ever happened in the history of the BCS standings

"I took the Notre Dame job wanting to have an opportunity to play for a national championship and have high graduation rates," says Notre Dame football coach Brian Kelly.

ABC 57 talked with Notre Dame’s Faculty Athletic Representative to the NCAA Tricia Bellia, and she said this just lets the university know they’re on the right path.

And it’s not just football.

Bellia said it’s a message that spreads across the entire athletic department. She said that 21 of Notre Dame Sports rank or are tied for the No. 1 spot in the GSR out of a total of 26.

She said the success for the Irish both on and off the field should encourage athletes to come to the university who are passionate about academics.

It should also push other programs to strive for something similar.

"I would hope that it’s a model for some other programs that they don’t need to resort to, sort of, allowing in athletes that don’t have the capacity to succeed or don’t have the engagement or the will to succeed," said Bellia.

"I hope it’s a model to suggest that this can be replicated elsewhere," she added.