Notre Dame looking on to biggest rivalry for confidence 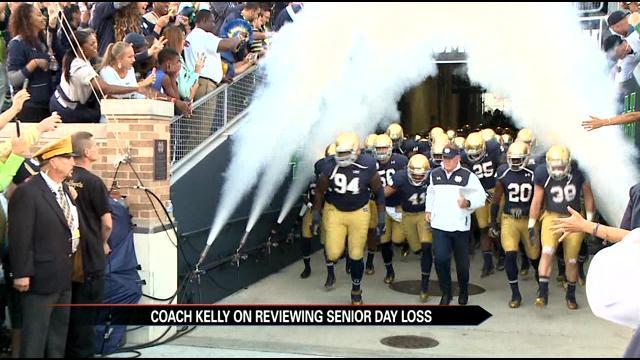 Fighting Irish fans suffered another heartbreaking loss on Saturday night. The blue and gold lost to the Louisville Cardinals by three points.

Sunday, Head Coach Brian Kelly held his phone conference and said it was disappointing because his team has been outscored by a combined ten points in three of the team's four losses.

The team is facing University of Southern California, and it is one of the biggest rivalries in college football.

With Notre Dame losing the last four of five games, Kelly said it is just important for his guys to end on a high note with a win.

It is a moment in time the Notre Dame Fighting Irish wish they could have back.

Make that two of them.

Two missed field goals that could have been the difference of Notre Dame's current 7-4 record.

Irish Head Coach Brian Kelly said he is still optimistic despite the turn of a season the Irish have had.

“I've got five freshmen and four sophomores out there.  They're battling their butts off.  So I don't think you can go away from it any other way but being very encouraged,” said Kelly.

The Irish have been plagued with injuries, suspension ions and turnovers all season, but Coach Kelly said next year is already looking up. He already has a lesson plan for the off-season.

“We have to carve out more time for these guys to continue to learn football and understand the game. We're never going to put it all on the players.  It's part coaching as well,” said Kelly.

The season is not at a complete loss. The team is still looking on to a bowl game but first thing is first.

Coach Kelly said practice this week is huge, because he said the reward of hard work is necessary, especially against the Trojans.

“This week is even more about just finding a way to get a win for these guys,” said Kelly.

Notre Dame will be taking on USC in California at 3:30 on Saturday.