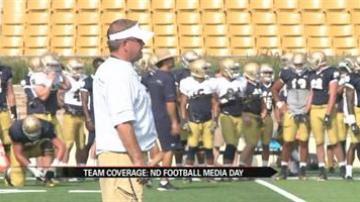 NOTRE DAME, Ind. -- The Fighting Irish opened up their practice and athletic facility to reporters on Tuesday for the 2014 Media Day.

“Key positions will be manned by familiar names and some players are stepping out of the tunnel for the first time, so kind of a unique blend for a football team that I have coached here at Notre Dame," said Kelly.

Kelly said the team lacks seniors, but has a hefty crop of 37 combined sophomores and juniors. 17 alone are fourth year juniors, so next year they'll have a number of fifth years.

The Irish are adjusting to recent changes.

This is the first preseason they've been able to use the stadium to practice since turf was installed.

“Just being familiar with the stadium, we didn’t practice in here and just getting our kids comfortable with the surroundings the end-zones, the sidelines," said Kelly.

Also the team is dealing with some personnel issues.

On Friday the university announced four Fighting Irish football players are being investigated for academic dishonesty.

Kelly said he spoke with them individually over the weekend. The players are still allowed to eat and hang out with the team at the athletic complex.

“For me, while this is an ongoing investigation I don’t have a problem with them being around the team," said Kelly.

The team is using Kelly's 'next man in' motto and working to fill the holes until the investigation is complete.

When asked if the expectations for the season have changed, Kelly said they remain the same.

“We don’t have a conference championship, so we only have one goal in mind and that is to get into the playoffs," said Kelly.

The team opens up the season at home against Rice on August 30th.