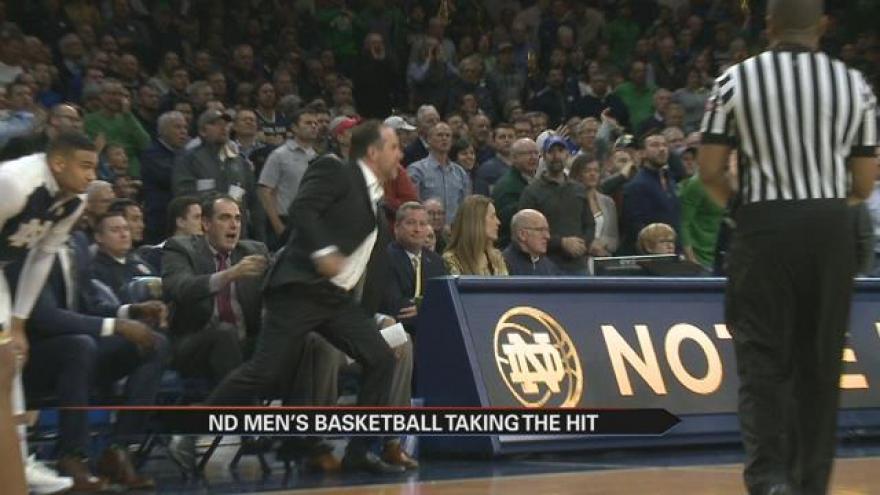 Head Coach Mike Brey has talked a lot about the ebbs and flows of a season. Right now, his team is an ebb, and its a bi-product of the league they play in.

"This league says they're coming and we're catching them," Brey said.

After dropping their third straight and fourth in their last five, the Irish's 5-0 start to league play seems like an eternity ago.

"You won five in a row out of the gate, you maybe never going to win five in a row again so you coach accordingly and you adjust how you handle your guys, not that you're lowering the bar, but you got to them realistic," Brey said Monday.

Brey said part of the changes made will come with the starting lineup, which will include removing Martinas Geben to go smaller.

"We really got to consider starting small like we did in the second half when the floor is open. There's something about starting off with some buckets going in, even if the other team is matching you," Brey said.

But trying it on the road against North Carolina is not an ideal situation.

"This is going to be a test of how together we are, you know our leadership but at the same time you know we're playing in the ACC, so bumps in the road are going to happen like this and it' all about hew we respond," V.J. Beachem said.

"Understand that we have a lot of work to do and we just got to keep working," Bonzie Colson said.

Known as one of the loosest coaches in America, Brey knows he can't waver from that philosophy, especially during this rough stretch.

"Our numbers are good, our numbers are very good, what gets us in? Does 9-9 get us in? You debate that and come back to me later," Brey said.