Notre Dame players excited to have Everett Golson back 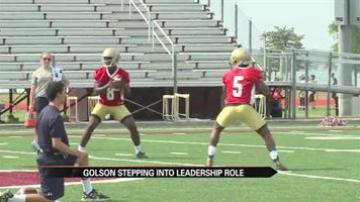 CULVER, Ind. -- Monday was the first day of training camp for Notre Dame's football team. There are two players competing for the starting quarterback position.

Players were excited Monday to have Everett Golson back, but he's not the only one vying for the quarterback spot.

"Now just coming back out here, it's really just more about trying to run this offense properly and trying to get everybody else on the same page," said Golson.

Golson is a leader who is quick on his feet.

"He's always confident which is awesome. He always gets you pumped up," said Nick Martin, offensive lineman.

The Fighting Irish are happy to have him back.

"It's great to have him back and he's a hell of a player. He's going to make some plays for us," said Christian Lombard, offensive lineman.

Golson is back from academic exile.

Like sophomore quarterback Malik Zaire, Golson is fast and mobile - a dual threat.

"I'm very excited both of those guys we've got. Especially as a running back I feel like they both, well all of our quarterbacks make us better players and give us the opportunity to do some really cool things," said McDaniel.

They give Head Coach Brian Kelly the offensive weapons for a fast paced attack.

"Coach Kelly likes to move it fast. He likes to move with a really fast tempo and so we're going to make sure that we adapt to that," said McDaniel.