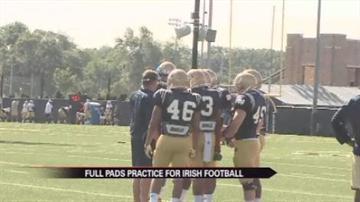 SOUTH BEND, Ind. -- Notre Dame's football team was out on the practice field in full gear Friday. Usually the preseason controversy is centered on the quarterbacks, but this year there is a complex running back situation unfolding. Six players are competing for the number one spot.

"The number one clear back will be that guy that runs the ball most effectively and is truly the best running back," said Notre Dame Head Football Coach Brian Kelly.

Even though the heat is on for Notre Dame's running backs, they're not letting it show.

"It's camp. Regardless of what everybody says, we're worried about ourselves," said George Atkinson III, running back.

Atkinson was a solid contributor last season to the Irish run game with a total of 361 rushing yards. He feels last year's experience will propel him this season.

"Every chance I have, every chance I get to go vertical and push the ball up field rather than trying to run around people and run faster-- you know that just comes with maturity and consistency," said Atkinson.

Junior Amir Carlisle is also back in the mix after missing last season due to an ankle injury.

Sophomore back will Mahone didn't see any playing time last season but by the looks of practice Friday-- could be a contributor this year.

For Coach Kelly, Mahone ranks with some freshmen for most impressive performance so far.

We talked to some of the veteran wide receivers about what they've seen from Tommy Reese so far this season. They say they've seen a lot more consistency in his play.

We also got to see Corey Robinson-- a freshman this year. He was getting quite a few reps but Coach Kelly says he's not quite a complete player yet.

Coach Kelly says Devaris Daniels is going to be playing a significant role in this year's team and he's definitely a player to watch.