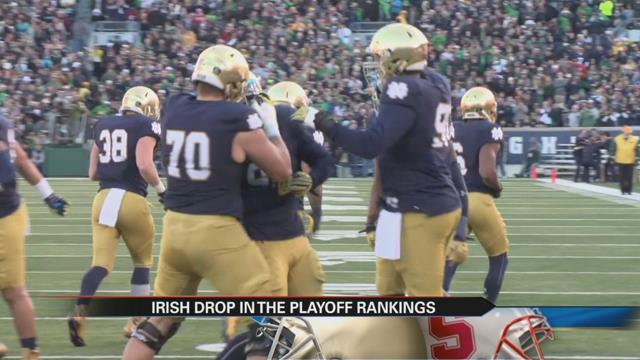 It's a shock to the system. Notre Dame dropping not one spot -- but two-- out of the college football playoff picture.

Players say they are disappointed, but their mission stays the same.

Some players just found out Wednesday morning, but say they are not bothered by it.

"I guess we can't really do anything about it so we'll see how they feel about it in 2 weeks," said Sheldon Day.

"I really don't care about the rankings right now. All I care about is Stanford," said Joe Schmidt.

Others are using it as a motivator.

"This game is going to be a big one to hopefully prove to the committee that we are one of the top 4 teams in the country and we should have the ability to play for a national championship," said DeShone Kizer.

They say they are used to being disrespected. So having something to prove is nothing new.

"We always have a chip on our shoulder," said Jaylon Smith.  "It's just a matter of executing and getting the victory."

They control what they control. Beating Stanford is the only power they truly have in the matter.

"You have the big, this overarching big picture," said Isaac Rochelle. "And part of that is winning each game. I think the biggest thing is we need to beat Stanford and we can have a discussion then."