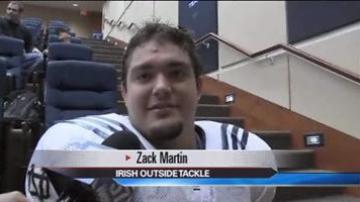 NORMAN, Okla. -- After two days, 16 hours and about 900 miles Jillian Mahen and Emily Pritchard have arrived in Oklahoma to cover Saturday’s Notre Dame game against the Sooners. It’s the first hostile environment the Fighting Irish have seen since Michigan State six weeks ago.

It's a fine line between confidence like that and the humility to get it done.

This weekend, the Fighting Irish will have to walk that thin line.

For the coach and his team, the past is one of the best lessons for Saturday.

"We played in the biggest college football game ever last year at Michigan and I don't see how it could get much more hostile than that,” said Notre Dame player Zack Martin.

So far, the Irish have only played one true away game this year.

They rocked the Michigan State Spartans at Spartan Stadium.

"I like the atmosphere, like when we went to Michigan State so I hope I get the same feeling,” said Nix.

The emotional environment of Spartan Stadium isn't the only parallel to the matchup against the Sooners.

This season, the Irish had to shut down the talented Michigan State running back Leveon Bell, push the run game against Miami and hold the line in overtime against a brutal Stanford team.

Saturday, containing Sooner quarterback Landry Jones and maximizing red zone opportunities will be two more challenges the Irish have to check off to win.

"I think that it's a good thing that we've seen that ability to throw the ball deep like in the Miami game so we've already had a little taste so we know what to expect a little bit,” said Notre Dame player Zeke Motta.

"We have to execute in the red zone. We have to realize the importance of getting down there and getting points and you know 4 trips for 10 points last week isn't going to get it done this week,” said Martin.

And with multiple areas of dominance, some say the Sooners will be Notre Dame's toughest opponent so far.

"I think they've got great athletes, they're well coached, I think they're the best combination of all the teams that we've played and that's why we'll have to play our best,” said Kelly.