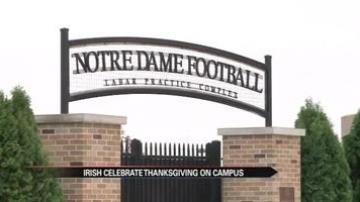 SOUTH BEND, Ind. -- While everyone is traveling to spend time with family this Thanksgiving, players on the Notre Dame football team will stay on campus. We spoke with players about their favorite Irish football Thanksgiving traditions.

"We usually have a Thanksgiving meal here at the Gug and they do a really good job with that, and coaches and staff usually have some of the players over for dessert or sometimes Thanksgiving meal and it's usually a lot of fun. We watch football all day, take some naps, it's a good time," said Chris Watt, offensive lineman.

Quarterback Tommy Rees says all of that turkey leaves a few of his teammates pretty sleepy.

"The past couple of years with Watt and Zack and Dan Fox, they can put some food down and like I said earlier 15 minutes later Watt and Zack are snoring on the couch," said Rees.

Spending the holidays in South Bend has become a special tradition of its own for the Irish. And seniors say it's something they will miss after graduation.

"Just to be able to come together and enjoy a meal like that with the coaches, with the support staff and with everyone. Everyone is kind of away from their real family but you're with your football family who you spend a lot of time with so it's a great time," said Dan Fox, inside linebacker.

"We have a lot of fun. Not being with your family is tough but being able to be with the guys makes it better," said Rees.

Head Coach Brian Kelly said the players that won't travel with the team to Stanford were released to go home to their families after practice.

The team leaves at 1 p.m. Friday for Stanford.