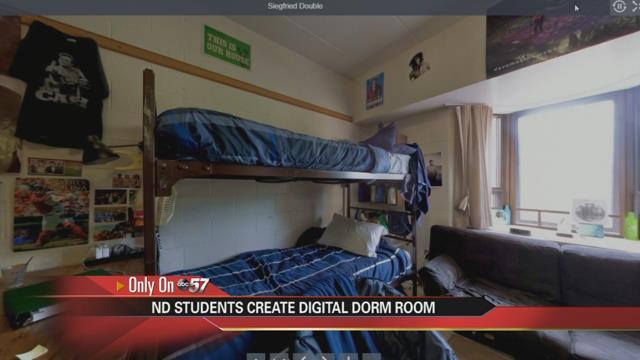 A group of Notre Dame sophomores who are a part of Design for America came up with the idea to put first year students at ease who will be living on campus.  Their goal is to ultimately create local and social impact for the benefit of their campus and community.

"The novel part that would appeal to freshmen is viewing the dorm room before they enter which is something Notre Dame students don't get to do,” said outreach lead Daniel Rashid.

Their project is called the Digital Dorm Room.

"We want to encompass all of the dorms.  We want to have different room types: doubles, triples, quads, even laundry rooms so that incoming students can really experience the full dorm room,” said team lead Jonny Xu.

They plan to do this by creating 360 degree photo-spheres.

"We went around using our phones to take these photos,”  said Xu.

The Google Street View app allows you to create a 360 degree photo with a regular phone camera. The app is user-friendly, but it also publishes each photo sphere publicly to Google Street View so that anyone in the world can see them.

The app stitches together over 20 separate photos, which often causes some large imperfections in the final draft of the 360 degree photo sphere.

In addition to making the room visible to students before moving in they also have hopes of making it interactive.

"Click on something and it'll pop up and show them what exactly this product is, where you can buy it, why is it more sustainable, how much energy it saves, and try to create a culture of a habit and a culture of when students are buying appliances for the room,” said Xu.  “They're considering not only cost but also their sustainable footprint."

So far the feedback from students have been positive.

“It was definitely the best resource that I found for getting an accurate idea of the spacing of the rooms,” said freshman Anna Smith.  “My roommate and I found it very helpful for seeing how we could loft our beds just prior to actually being in the room."

While they're unsure if they're the first university to do this, they're hoping that their project is something that can catch on and become a norm for universities across the country.

The students are raising money so they can get a real 360 degree camera so they can make better photo-spheres and also make them interactive as they mentioned.

Check out their GoFundMe page if you are interested in donating to help them out.